In recent years ceiling fans have evolved to compliment everyones taste in design with a wide variety of colours, blade styles and finishes. The ceiling fan is no longer relegated to being an ugly but functional part of your home decor and can now be a feature in itself.

In function Ceiling Fans increase airflow in a room creating a fresh feel, and suiting those who prefer to open up their windows and their home in summer. In Winter any fan can be reversed pushing warm air that is trapped up at the ceiling back down to the floor, requiring less heating in a space. 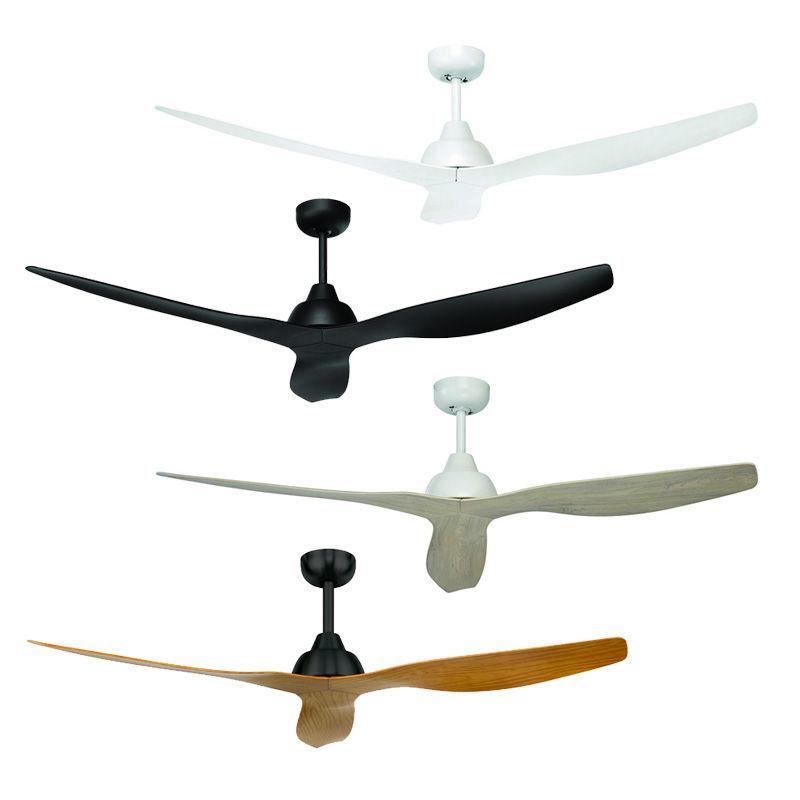 AC is the older technology used in Fan Motors, the motors usually come with a 3 or 5 speed wall controller and optional remote control. AC fans do have a reverse function but that is normally a switch on the body that you need to physically flick to swap the fan between summer and winter modes.

DC fan motors are the more modern technology, DC motors are quieter (virtually silent) and consume less power to run (usually around 60% of the power of an AC motor). DC fans typically come with a 5 or 6 speed remote control that includes the reverse function on the remote.

In the past their were two main types of fan blade, wood or metal. Wood fan blades are quieter and recommended for bedrooms, while metal blades can be formed to push more air and though they are noisier can be used in living spaces and commercial spaces. Often wider span fans will have metal blades.

Recently some manufacturers have started to use ABS plastic blades, this brings the best of both worlds to standard sized fans, they are moulded to shape to more efficiently move air, yet still very quieter than wood blades.

The upshot of this? in the home you should look to ABS or wood bladed fans in areas where noise is an issue (bedrooms), steel bladed fans should only be used in noisy parts of the home and when the fan suits your decor.

Sizing and Mounting your Fan 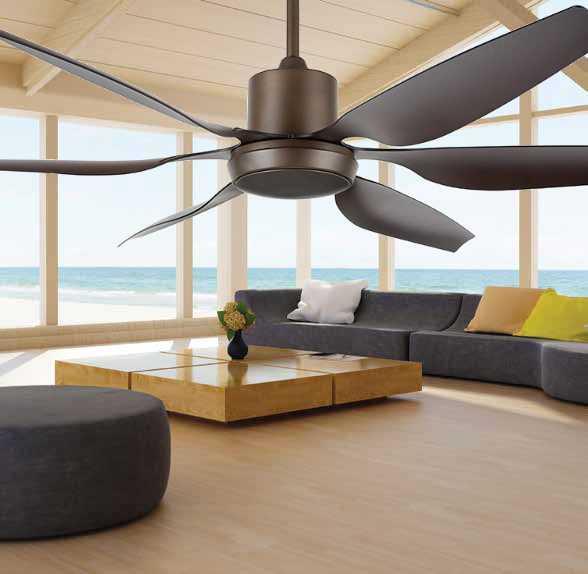 Sizing a fan is a very important consideration for customers, but placement and airflow are often overlooked. There is no strict best size of ceiling fan for a room but we do have some handy tips to help you find the right size of fan and place it correctly.

This chart gives some approximate fan diameters to get you started, but always remember an oversized fan will cool even more of the room and be visually striking, the only rule we follow at all times is to keep any fan at least 750mm-1000mm away from the walls of the room.

Who does my Ceiling Fan cool the most?

The main cooling effect of a fan is directly below it, there is a sharp drop off in cooling effect from about 750mm from the side of the fan. If you have a wide area of seating in a room consider using an oversized fan to properly cool the areas of highest use in the room.

Often the seating area will be off to the side of the centre of the room, in this case, you should use as large a fan as you can handle or offset the fan above the seating area to maximise the cooling. From a design perspective offsetting the fan can also help create zones in a large open plan space.

Smaller fans are most helpful if they are correctly placed, so in a large bedroom, you could opt for a 52” fan that is placed directly over the bed.

Different fans move at different speeds, many larger fans are what we call High Volume Low Speed (HVLS) fans and are designed to run at a low speed (RPM) yet still push a large volume of air. This will mean at low speeds the cooling effect or airflow is lower but if these larger fans (usually 66” - 1680mm diameter or larger) were to run at a higher RPM it would be overwhelming.

The upshot is that the fan has a slower swooping motion, which is similar to what you would expect from fans in industrial or commercial spaces. 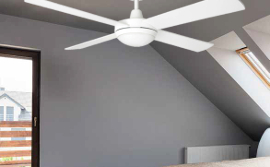 The ceiling height doesn’t impact airflow too much just the type of fan you can select as, for safety, a fan should never hang below 2100mm from the floor. This prohibits a lot of fans being used on a 2.4m high ceiling. Once your ceiling gets above 2.7m high you should also use a downrod with the fan to bring the fan down to 2100-2300mm from the floor to maximise the cooling effect.

One last note on angled ceilings

Most fans have a ball-joint built into the base so that they can work on an angled ceiling, but the degree of pitch varies drastically from model to model. Once you have narrowed your fan selection make sure the fans will work with the angle of pitch of your ceiling or else you will need to get a block made to compensate.